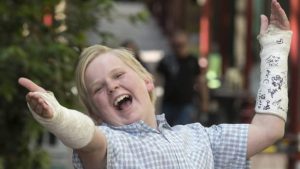 Jayden Walker, Roncalli College, was selected for a Solo Role in NZ Opera’s Tosca. He has been selected to play the ‘Shepherd Boy’ who sings ‘Io de’ Sospiro’. Photo courtesy of Stuff.co.nz.

Kavanagh College, John McGlashan College and Columba College, all in Dunedin, were the subject of a major article in the NZ Herald, 26 February 2018, on their work in agriculture. Kavanagh College has introduced agribusiness as a subject, and the other two colleges collaborated as lead schools in setting up a centre of excellence for agricultural science and business. Agribusiness has a science and/or business focus so pupils are able to keep all options open.

Columba College, Dunedin welcomes the return of an onsite chaplain to the school, with the appointment of Dr Jennifer Macleod.

Roncalli College, Timaru: Jayden Walker has been selected for a Solo Role in NZ Opera’s Tosca. He has been selected as the ‘Shepherd Boy’ who sings ‘Io de’ Sospiro’, the only solo part for a child in Tosca. He will perform for audiences at the Isaac Theatre Royal in Christchurch, alongside two of NZ’s top Opera singers, Teddy Tahu Rhodes and Simon O’Neill.

St Theresa’s School, Plimmerton featured in the Education Gazette of 27 November 2017, with an update story on the schools’ work with sign language. Having won the Schools section of the Deaf Aotearoa NZSL in Action Awards the school has attracted a lot of interest, and has Van Asch has now worked with them to create a video, viewable here.

St Brigid’s School, Wellington: Zach Fairless has been selected by the NZ International Softball Academy to represent NZ in the 13s in Los Angeles and Canada.

Holy Family School, Porirua, was featured in the Education Gazette (Vol. 95 No. 22) for their flagship programme, The Family So’otaga, which aims to remove barriers to education by forging closer relationships between home and school. Link here.

St Columba’s Catholic Primary School, Hamilton: Staff member Chris May was on TV1’s ‘Good Sorts’ for his work with boys in the school, teaching them the skills to make them a good man. Link here.