Pompallier Catholic College, Whangarei:  At the NZSS para-athlete event, Daniel Meyer won gold in the shot put.  He also won silver in the discus with a NZ record for his classification.

St Francis Xavier Catholic School, Whangarei: Tamatea Davis, Keakealani Seve and Luka
Roulston competed at the Waka Ama Nationals at Lake Karapiro.  All three made their respective finals. Tamatea and Keakealani paddled together in their teams to come first in the championship for W12 250m.  Tamatea also paddled with his team to come 2nd for the W6 250m. 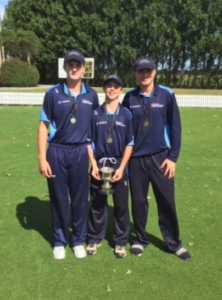 The following girls were named to represent Auckland at their National Age Group Cricket Championships for the 2018/2019 season.  All three teams won their tournaments.

Rhea Patel qualified to compete in the World Indoor Archery Competition, as part of the NZ Black Arrows Team. Audrey Rossolatos (Y9) achieved the following at the NZ Archery National Competition: gold in Target (over 400 points clear of the field); gold in Individual Matchplay; silver in the Team Matchplay. Amy Laithwaite has been selected for the NZ Youth Symphony Winds Band, and has performed two concerts with them. Molly Penfold and her U18 Counties-Manuaku team won the national title in touch rugby.

In sailing, Stella Bilger competed in the BIC Worlds in the U17’s and was the 1st NZ girl and 2nd NZer and gained 12th place overall. Natalya Carter won a gold medal for the 16-19 category at the NZ National Sprint Championships for Triathlon.  She has been selected for the NZ in the Oceania Junior Triathlon Cup. Viak Koloto has been named in the squad of 22 players by Netball NZ from which the 2019 NZ Secondary School team will be chosen. Grace Cummins has been selected in the NZ U19 team to compete in the Oceania Road Cycling Championships.

At the Future Champions Triathlon Festival Olivia Gibson placed 1st in the swim-run event, and Natalya Carter placed 1st in the Triathlon event. Simmone Lawson (Y8) was part of the Hibiscus coast U12 Tag team that won the Under 12 National Tag Tournament. Caitlin O’Reily who swam across Lake Taupo 40.2kms becoming the youngest female to complete the lake crossing.

Rosmini College, Auckland:  Taine Murray, Terence Abdon, Sean Joseph Murphy and Thomas Morgan have been selected for the NZ U17 Junior Tall Blacks training squad.  The U17 team will play in the FIBA Oceania Championship in an attempt to qualify for the FIBA Asia Cup.

Marist Catholic School, Auckland: Florence Gillespie has had her portrait art chosen to be published in the latest Toitoi publication. 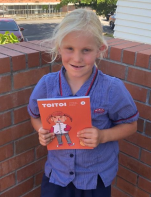 St John’s College, Hamilton: Max McQuoid starred in NZ’s first GTramp games.  He won the trick and game senior titles and could represent Australasia at the US or Europe GTramp games. Jadeim McGroy will represent the NZ U18 B Canoe Polo side at the Oceania Champs.

St John’s College, Hastings: The following students were selected to play for NZ Canoe Polo team at the Oceania Champs in Sydney.

Georgia with her first place certificate.

Villa Maria College, Christchurch: Georgia Smith competed at the Piping and Dancing Association NZ Championships and was awarded first place in the in the Sailor’s Hornpipe dance.

St Josephs’ School, Queenstown: Samuel Muir rode 152km in seven hours straight to raise funds for Variety Charity. Samuel got to choose where the money raised was spent and he decided to donate the money for bikes for disadvantaged children across NZ. He raised enough money to buy six bikes in total.