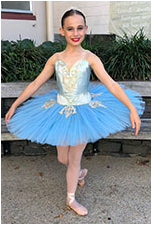 Carmel College, Auckland: Daragh Bonnici (Y7) has been selected from over 600 dancers nationwide for a child role in the Royal NZ Ballet production of The Nutcracker this December. Ava Fitzgerald (Y9) represented NZ at the Perth International Gymnastics Championships. She won a gold medal for her floor routine, a Bronze medal for beam and a Bronze medal in the all-round competition. She achieved the highest overall score for Level 9 which helped her team to achieve the Gold medal in the teams competition. Sionann Murphy won 50m Breast Gold, 100m Breast Gold and 100 Free Silver at the NZSS Swimming Nationals. Tayla Dalton has been selected for the Junior Tall Blacks (U19) team and will compete at the World Cup Qualifiers.

St Mary’s College, Auckland: Lola Key (Y13) has been selected for the women’s IRB (inflatable rescue boat) team to represent NZ at the Lifesaving Championships. At the NZSS Swimming Championships, Kyla Anderson won the Gold medal in the Girls 16-18 years 100M Backstroke, a silver medal in the 50m Freestyle and a bronze medal in the 50M Butterfly. At the Cycling NZ events Ally Gothard won the NZ Time Trial Championships and the NZ Hill Climb Champs for U15 Girls. She also won the overall U15 Girls Northern Tour title.

Sacred Heart Girls’ College, Hamilton: Nikita Toia has been selected for the NZU17 softball team. Lucy Lowe won the 125 Years of Women’s Suffrage Writing Competition organized by the Hamilton Branch of the National Council of Women. Her essay, about why the voting age should be lowered to 16, was presented at the Suffrage 125 Function in Auckland. Aylish Waldron (Y13) received a High Distinction award in the NZ Economics Competition.

St John’s College, Hastings: David Ivory, Head of Department, Commerce has been named a finalist in the NZI Sustainable Business Network Awards 2019, for leadership of the Social Enterprise Programme based on students’ work with inmates and those with mental health issues.

Alix Blyde, Caitlin O’Connell, Tiaan Owen, Emily Poole, Raquel Sampson and Gemma Walsh were members of the Taranaki Basketball U17 girls’ team which won the gold medal at the National Basketball Championships. Sasha Reid has been selected for the Junior Black Fins to compete at the Lifesaving Word Championships. Hannah O’Connor has been named in the NZ Athletics team to compete in the World Youth Olympics in Argentina.

Flynn Barrett was awarded Excellence, (98th percentile) in the University of Canterbury Kiwi Science Competition. Jacob Ratumaitavuka-Kneepkens has been selected for the NZ Fiji Schools Sevens training group for 2018. This squad is to prepare for the World Schools Sevens Competition, to be held in Auckland and Fiji.

Tuimaleali’fano Fiso, accompanied by Mrs Tawai Frost, Teacher in charge of Te Reo Māori and they are pictured with the Korimako Trophy (winner of Senior English competition) and the Kiri Mangu Trophy (winner of impromptu speech)

Sacred Heart College, Lower Hutt: Tuimaleali’ifano Fiso came 1st in Senior English Impromptu Speech and was Overall Winner of Senior English at the National Ngā Manu Kōrero Speech Competition finals. The Royal Society of Te Apārangi has selected Y12 student Gianna Lill to attend the National Youth Science Forum. This is a 12 day immersive science experience. The programme consists of a mix of scientific, formal, personal development and social activities. All aspects of the programme contribute to one of the central strands: STEM in action, STEM in society and the next generation of STEM. Olivia Gibbs (Y11) was in the Capital Futsal team that won the National Championships. 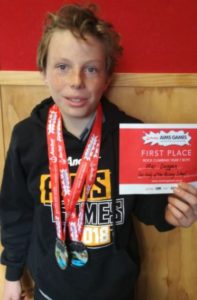 Mac Duggan, Our Lady of the Rosary School, Lower Hutt

Our Lady of the Rosary School, Lower Hutt: Mac Duggan placed first overall at the AIMS Games in Rock Climbing for Year 7 boys. Annabel has been selected to dance in the Royal NZ Ballet production of The Nutcracker.

St. Patrick’s College, Kilbirnie, Wellington: Josh Wypych (Y13) was a member of the Capital Hockey team that won the National U18 title. Max Karamanolis (Y13) has been selected into the NZ Cross Country team to compete at the Australian Championships. Jackson Manual (Y11) has been selected in the NZ U17 Football team to play in the Oceania tournament in the Solomon Islands. Cam Fitzgerald-Little and Caleb Ward have been selected in the NZ U19 Floorball team to contest the Oceania World Cup qualifying tournament. 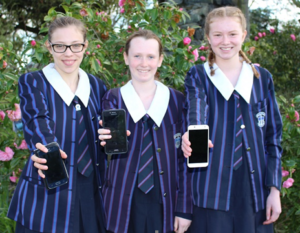 Villa Maria College, Christchurch: Paris Wadle, Sarah Williams and Leonie Stauder (Y10) won the National Tech Girls are Superheroes competition with their app called Bi-schooling. The competition challenge students to create apps to solve problems or issues in the community. The bi-schooling app helps children who would like to bike to school to find others to bike safely together in a group, and identify the safest route.

St Johns Girl’s School, Invercargill: Ivy Turner and Molly Cole who have been selected to dance in the Nutcracker Ballet with the Royal NZ Ballet Company. 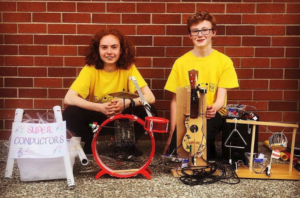