Rosmini College, Auckland: student Kruz Perrot-Hunt has been awarded a basketball scholarship to Dakota University; he has also been called up to the Tall Blacks squad. Click here. The Kapa Haka group performed a haka powhiri for the Prime Minister and the Minister of Health at a recent North Shore Hospital event. View here.

Carmel College, Auckland: student Hayley Rutter has developed a chocolate and vanilla flavoured buffalo milk for premium health conscious buyers, with the Whangaripo Buffalo Cheese Company. She was recognised as a top scholar in technology in the Ministry of Education’s Technology Online. Read more here.

De La Salle College, Auckland: two science teachers, Kane Raukura and Ajinesh Kumar , were featured on 1 News for their creek clean-up work. They have weaved the environmentally focused project into their wider science curriculum which has contributed to improved student engagement and achievement. View here.

Campion College, Gisborne: student Madeleine Pittar was interviewed about her work as a Gateway student, and was the only student featured in the article ’Transitioning into the world of work while at school’, page 26 of the 30 October 2018 edition of the Education Gazette (view online here). 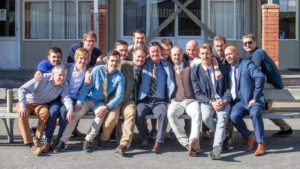 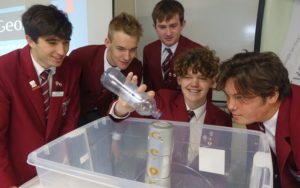 St John’s College, Hastings: the school has won one of only four national Young Enterprise Teams excellence awards for their project that partnered students and prisoners in the design and creation of rimu bread boards. This is along with their National Whai Tikanga Award for the use of the arts as an integral part of a tikanga programme to encourage a strong cultural identity and support pro-social living and their highly commended status at the 2018 New Zealand National Commission for UNESCO Awards. In addition, students Kadyn Newport, Rhyva van Onselen, Shane McDonald, Brad Selwood and Ben Gardiner featured on national news recently, for their invention of a low-cost rain and flood monitor alert system. It detects flooding levels for holiday homes and farms and sends an alert to the owner’s cell phone.

Bishop Viard College, Porirua: Head student, Imran Tautu was recognised for his outstanding leadership at the Graeme Dingle Foundation 2018 Excellence Awards. He received the Stars Outstanding Contribution from a Peer Mentor Award, as a mentor making a significant difference in the lives of juniors in their school.

St Mary’s College, Wellington: student Charise Perez (Y11) was elected as the Youth MP for Wellington Central. A group of students set up a business for the Young Enterprise Scheme. Their enterprise, called The Final Straw, raises awareness about reducing plastic waste by providing means for businesses to source alternatives to plastic straws and creating marketing material to communicate environmental sustainability. They won a National Excellence Award for their work. Click here to read more.

St Thomas of Canterbury, Christchurch: the school was featured in Tukutuku Kōrero | The Education Gazette for their use of gaming mechanics to enhance teaching methods. Read here.