Dr Kevin Shore has been appointed the new Chief Executive Officer of the NZ Catholic Education Office, replacing Mr Paul Ferris QSM, who is retiring at a date to be set later this year. Dr Shore will be Chief Executive of both NZCEO and the Association of Proprietors of Integrated Schools (APIS).

Dr Shore is currently the Principal of St Peter’s College, Palmerston North, and previously Principal of Cullinane College, Whanganui. He has a Doctorate of Education, a Masters in Educational Administration, a Post Graduate Diploma in Technology Education; and an NZ Civil Engineering Certificate (from a previous life!). His leadership has been in both state and state integrated schools over the past 25 years.

Following his doctorate, he has been published in a number of professional journals as he focused on growing leadership in our schools. 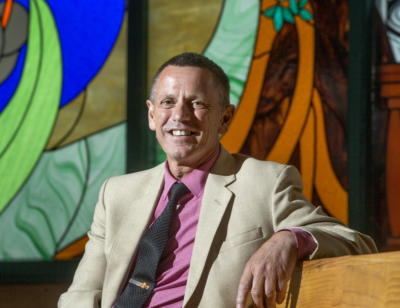 Dr Shore has a strong commitment to te Tiriti o Waitangi. He has a genuine commitment to equity in education, and supports the practice of akonga and whānau (student and family) because of the way it aligns with the social justice focus of our school communities. He was fortunate to be accepted for a special equity-focused leadership course at Harvard University in 2015. More recently he has been a member of the Ministerial Joint Task Force for reducing the burden of administration and compliance in schools.

Kevin has a solid commitment to the mission of Catholic and other faith-based schools. He has a strong interest in the outdoors and has coached students in various sports over the years. He and his wife Heather are looking forward to moving to Wellington, and the opportunity of working there with sector leaders and representing the interests of integrated schools in many of the forums based in the capital.

Mr Geoff Ricketts, chair of the NZCEO Board, said he was looking forward to welcoming Kevin to the role: “I am sure he will build on the excellent leadership given during the past 25 years, first by Sir Brother Patrick Lynch and then by Paul Ferris.”